SAN JUAN, P.R. — Gov. Ricardo A. Rosselló of Puerto Rico announced his resignation on Wednesday night, conceding that he could no longer credibly remain in power after an extraordinary popular uprising and looming impeachment proceedings had derailed his administration.

In a statement posted online just before midnight, Mr. Rosselló, 40, said he would step down on Aug. 2.

He said his successor for the moment would be the secretary of justice, Wanda Vázquez, a former district attorney who once headed the island’s office of women’s affairs. Ms. Vázquez was next in line under the commonwealth’s Constitution because the secretary of state, who would have succeeded Mr. Rosselló as governor, resigned last week when he also was caught up in a chat scandal that enveloped the administration.

[Ricardo Rosselló had a close circle of associates who shared advice and friendship. But critics said the Puerto Rico governor became too isolated from others.]

But the governor appeared to leave open the possibility that a different successor could be in place by the time he steps down.

His ouster by popular demand meant more to Puerto Ricans than a rejection of Mr. Rosselló’s administration. It amounted to a resounding repudiation of decades of mismanagement and decline that everyday people blamed on politicians in San Juan and Washington.

Mr. Rosselló began his announcement by citing some of the accomplishments of his administration, including passing a balanced budget with no layoffs of public employees, fighting corruption, establishing positive economic growth and lowering taxes. “We raised the salary of teachers in the middle of a bankruptcy,” he said. 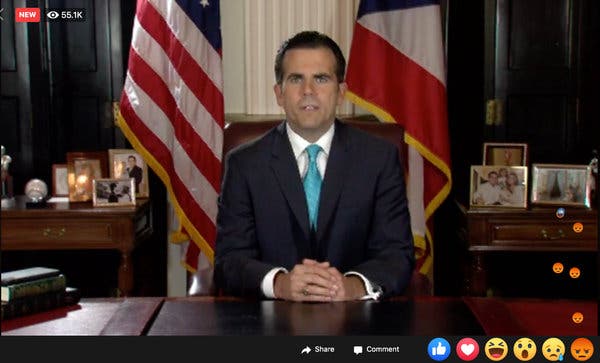 He added: “I hope this decision serves as a call to citizen reconciliation.”

Hundreds of protesters outside La Fortaleza, the governor’s official residence, went suddenly silent on Wednesday night when Mr. Rosselló’s message began to air after hours of delay, with groups huddled around cellphones to listen. The crowd, shouting, grew restless as the 14-minute statement dragged on, but it burst into thunderous applause the moment he announced he would resign. Puerto Rican flags shot into the air and the drumbeats began, to chants of “¡Oé! ¡Oé ¡Oé!”

“I’m overjoyed. We did it, we did it,” said Meralys Lebrón, 28, as she danced with friends to the beat of the drums. “This matters to everyone in Puerto Rico. He showed us he was not the leader we need right now.”

“This is historic. Absolutely historic,” Aixa González, 28, said. “I have never seen anything like this and I can’t even put it into words. This is what he gets, this is justice.”