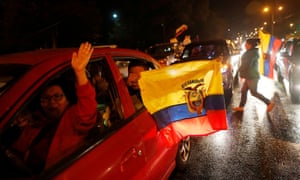 [Ecuadorians celebrate on the street after the government agreed to repeal an austerity law. Photograph: Carlos García Rawlins/Reuters]

Ecuador’s president, Lenín Moreno, has struck a deal with indigenous leaders to cancel a disputed austerity package and end nearly two weeks of protests that have paralyzed the economy and left seven dead.

Under the agreement, Moreno will withdraw the International Monetary Fund-backed package, known as Decree 883, that included a sharp rise in fuel costs. Indigenous leaders, in turn, will call on their followers to end protests and street blockades.

“Comrades, this deal is a compromise on both sides,” Moreno said. “The indigenous mobilisation will end and Decree 883 will be lifted.”

The two sides will work together to develop a package of measures to cut government spending, increase revenue and reduce Ecuador’s unsustainable budget deficits and public debt.

In the park that was the centre of the protests, demonstrators armed with wooden sticks and improvised shields shouted: “We did it!”

“I’m so happy I don’t know what to say. I don’t have words, I’m so emotional. At least God touched the president’s heart,” said protester Rosa Matango. “I am happy as a mother, happy for our future. We indigenous people fought and lost so many brothers, but we’ll keep going forward.”

“The moment of peace, of agreement, has come for Ecuador,” said Arnaud Peral, the United Nations’ resident coordinator in Ecuador and one of the mediators of the nationally televised talks. “This deal is an extraordinary step.”

Wearing the feathered headdress and face paint of the Achuar people of the Amazon rainforest, the president of the Confederation of Indigenous Nations, Jaime Vargas, thanked Moreno and demanded improved long-term conditions for indigenous Ecuadorians.

“We want peace for our brothers and sisters in this country,” Vargas said. “We don’t want more repression.”

Protests over the austerity package have blocked roads, shuttered businesses from dairies to flower farms and halved Ecuador’s oil production, forcing a temporary halt to the country’s most important export.

In a shift from the heated language of the last 10 days of protests, each side at the negotiations praised the other’s willingness to talk as they outlined their positions in the first hour before a short break.

Other indigenous demands included higher taxes on the wealthy and the firing of the interior and defense ministers over their handling of the protests.

“From our heart, we declare that we, the peoples and nations, have risen up in search of liberty,” Vargas said. “We recognize the bravery of the men and women who rose up.”